The Dusquetide Saga – a Structural Blast From the Past!

A paper describing the interaction of the therapeutic peptide dusquetide with the ZZ domain of the autophagic receptor p62 is featured in Structure. A publication comes around 12 years after the structure solution; it is a pleasant surprise! 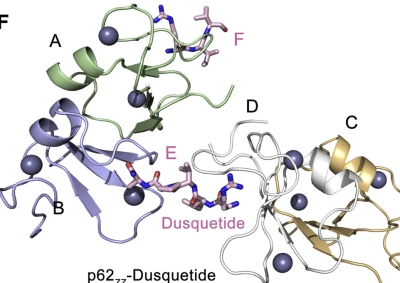 SARomics were recently co-authors on a paper in Structure describing the interaction of the therapeutic peptide dusquetide with the ZZ domain of the autophagic receptor p62. Dusquetide, a product of the company Soligenix, is based on natural mucosal defense peptides, has broad-spectrum activity against bacterial infections and inflammation, and has completed phase 2 and 3 clinical trials as a treatment for oral mucositis. Dusquetide has no direct antibiotic activity but counteracts the effects of tissue damage and increases survival following infection, trauma, or chemo/radiation therapy.

What needs to be apparent from the article is that SARomics solved the crystal structure featured in the paper way back in 2010, when we were only four years old! At that time, our customer was the Canadian company Inimex Pharmaceuticals, which sold the IMX942 project to Soligenix in 2012. SARomics’ molecular biology partner expressed the protein at the time, Vectron Biosolutions, in Trondheim, Norway, then purified and crystallized by SARomics. We solved the structure of the complex with the peptide using single-wavelength anomalous diffraction (SAD) data from the native Zn2+ ions in the ZZ domain, collected at the old MAX-lab synchrotron in our hometown Lund (also no longer operational, though it has been replaced by one of the world’s best synchrotrons, MAX IV!) Our data were not even at the optimal wavelength for Zn SAD, but the structure solution succeeded anyway due to the structure having two Zn2+ ions for only about 50 amino acids!

After the structure solution, we made a joint press release, but the project remained “filed and forgotten” at SARomics for over a decade. We were contacted by Oreola Donini, our contact at Inimex, who had moved to Soligenix in 2013, where IMX942 was now known as SGX942. Further NMR and biology work was contributed by the group of Prof. Tatiana Kutateladze at the University of Colorado School of Medicine. Together, the results showed the mechanism of action of dusquetide through its binding to p62.

As a contract research organization, it is entirely up to our customers whether or not they want to publish the results of our collaborations, and this may happen years later, if at all. Nevertheless, this may be our “personal best” in the category. When a publication comes around 12 years after the structure solution, it is a pleasant surprise!